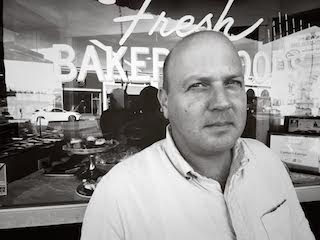 Anthony Seidman (1973, Los Angeles) is the author of three collections of poetry, including Where Thirsts Intersect (The Bitter Oleander, 2006). His latest collection of poetry, A Sleepless Man Sits Up In Bed, is forthcoming early 2106 from Eyewear Publishing of London, England. In 2015, he published, along with co-translator David Shook, Confetti-Ash: Selected Poems of Salvador Novo (The Bitter Oleander). He has published dozens of poets from the northern border region of Mexico, and these versions in English includePetition To NASA To Include A Poet On Its Next Mission To Outer Space And Other Poems by Martin Camps, published by Observatorio Editorial of Tijuana, Baja California, as well as numerous features in such journals asWorld Literature Today, Nimrod, Modern Poetry In Translation, and Huizache, among others. He has collaborated with French artist, Jean-Claude Loubieres on three artist books, all published by AdeLeo of Paris, France, and these works are included in such collections as the Bibliotheque Kandinsky at the Centre Pompidou. His poetry has been published in the United States, England, France, Mexico, Romania, Bangladesh, and Nicaragua, in numerous journals including Ambit, Luvina (University of Guadalajara), Bengal Lights, The Black Herald Review, La Prensa of Managua, Beyond Baroque, and Cardinal Points, among others. His work is also included in the anthologies: California Prose Directory 2013 (Outlook Press), The Ecopoetry Anthology(Trinity University Press, 2013), Transatlantic Steamer: Vapor transatlantico (Hofstra University / Fondo de Cultura Economica).