A young man made of paper is an unwelcome addition to a strange, anarchic city by the sea.

Michael was only 15 when a mysterious accident changed his life forever. Left for dead, he was rebuilt out of paper by his father. Ten years have passed and Michael is now an adult, still trapped in the paper version of his teenage body. To escape the stagnant life of his inland home, he runs away to the city by the sea, which holds the promise of art, adventure, and possibility of finally fitting in. Instead, Michael discovers the city is tearing at the seams. With rumors swirling that a militarized north will annex the city, newcomer Michael has more to worry about than the unpredictable seaside weather.

After being rescued from a rainstorm by Maiko, an unemployed fur model, and falling into a life of stability and anonymity, Michael’s cruel high school sweetheart Mischa suddenly reappears. Michael becomes torn between his friendship to Maiko and Mischa's decadent underground art world. But when he finds himself drawn to the city's most notorious artist, David Doppelmann, Michael begins another dangerous transformation, one that will either lead to uncovering his true self, or ignite the city toward revolution and destroy him and everyone he cares about.

Part fable, part surrealistic journey, Gallagher Lawson’s impressive debut is a gripping narrative about the nature of artistic identity and its tenuous relationship to the greater good. By creating an alternate reality that nevertheless mirrors our own troubled world order, Lawson has created a visionary, allegorical novel of our time.

Praise for The Paper Man

"THE PAPER MAN is one of the most inspiring and original books I've read in years. Gallagher Lawson has written a lustrous fable comprised of loneliness, blood, and love. The Wizard of Oz on laudanum, a Bjork musical in letters, this devastatingly powerful debut challenges us to imagine what it would be like to be made of nothing more than paper, to live in a world where mermaids are murdered and art is the only path to actualization, a world, in many ways, not unlike our fragile own."
—Samuel Sattin, author of LEAGUE OF SOMEBODIES and the forthcoming THE SILENT END

"Gallagher Lawson belongs to the new wave of writers using fantastical elements to mine deeper into realist territory. A strong debut from a promising writer of agile talents."
—Shane Jones, author of LIGHT BOXES and CRYSTAL EATERS

"This bizarre, compelling debut combines the darkness and political intrigue of Kafka with the eerie hyperrealism of a Magritte painting. Michael, the Paper Man, is a highly unconventional and persuasive hero, and David Doppelman among the strangest—archnemeses? father figures? manifestations of the self?—I’ve ever seen in a novel. Gallagher Lawson is a weird and wonderful writer."
—J. Robert Lennon, author of FAMILIAR and SEE YOU IN PARADISE

"Lawson has created a bizarre world that incorporates ideological and political problems without ever losing its empathy and feeling for his characters. Beautifully written and finely wrought, this novel is a surreal coming-of-age story that considers the boundaries between art and life."
—Publishers Weekly,

"Gallagher Lawson’s debut novel, The Paper Man, has a striking, gutsy premise: A young man named Michael — who is, as the result of a dreadful accident, made of paper — navigates a mysterious, unsettling city by the sea. In addition to inhabiting the existence of this paper man and the peculiar world he moves through, the novel also delves beautifully into thorny philosophical questions about art, identity and transformation."
—Laura Van Den Berg, The Los Angeles Times

"In this allegorical tale, Michael’s corporeal form is a stand-in for art itself. Lawson gives voice to the artistic yearning to define creative existence."
—Heather Scott Partington, Electric Literature

"The Paper Man is a rare narrative, announcing the arrival of an outstanding new voice that comfortably inhabits the strange place where literary fiction, surrealism, and gritty fantasy converge."
—Gabino Iglesias, Electric Literature

"A bizarre but engrossing tale about a boy who suffered a childhood accident and was rebuilt out of paper by his father. A decade later, the boy longs to escape from the paper version of his teenage body."
—Houston Chronicle, 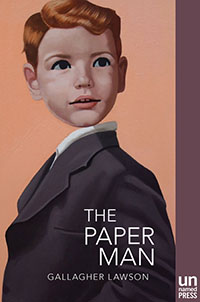 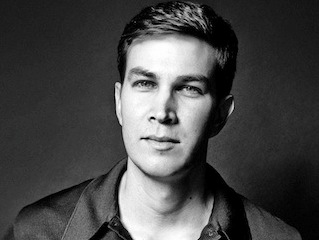 Gallagher Lawson is a graduate of U.C. Riverside's Palm Desert M.F.A. program. He has worked as a travel writer and technical writer, and plays classical piano. He lives in Los Angeles.