From ancient Greece to Grindr, the underground practice of cruising has changed in fascinating ways, and also not at all.

Acclaimed author Alex Espinoza takes readers on an uncensored journey through the underground, to reveal the timeless art of cruising. Combining historical research and oral history with his own personal experience, Espinoza examines the political and cultural forces behind this radical pastime. From Greek antiquity to the notorious Molly houses of 18th century England, the raucous 1970s to the algorithms of Grindr, Oscar Wilde to George Michael, cruising remains at once a reclamation of public space and the creation of its own unique locale—one in which men of all races and classes interact, even in the shadow of repressive governments. In Uganda and Russia, we meet activists for whom cruising can be a matter of life and death; while in the West he shows how cruising circumvents the inequalities and abuses of power that plague heterosexual encounters. Ultimately, Espinoza illustrates how cruising functions as a powerful rebuke to patriarchy and capitalism—unless you are cruising the department store restroom, of course.

Praise for Cruising: An Intimate History of a Radical Pastime

"Against all they have tried to do to bury our revolutionary past, Alex Espinoza brings it to life in a work that is equal parts secrets shared in confidence, sweeping historical account, and learned analysis. Against all the neutering of our social movements and the treacly lure of assimilation, Espinoza's fast-paced, compelling narrative shows readers the radical community of struggle, contact and solace from which we came, and to which we belong still."
—Jordy Rosenberg , author of CONFESSIONS OF THE FOX

"Alex Espinoza's much-anticipated book takes readers on a unique 'cruise' through places of public gay-sex connections, from early times to today's apps and sites; and the result is as lively and entertaining as a boldly intimate, and wonderfully written, memoir. "
—John Rechy , author of CITY OF NIGHT

"Espinoza's painstakingly documented love letter to cruising is a rare achievement. Not only does he excavate an oft-hidden and -policed queer history, but he also topples the myth that LGBTQ progress conforms to a single, 'straight' narrative. In a culture that often flattens queer stories to fit assimilationist standards, Espinoza's book stands out as a beacon for future queer writers, thinkers, and activists. Reading these accounts, I felt myself drawn into a past both wonderful and strange, a world I hope we will continue to celebrate and preserve."
—Garrard Conley, author of BOY ERASED

"With this gentle and authoritative tone, the reader is guided through a history too often written off as unworthy of examination. "
—Sara Neilson, The Brooklyn Rail

"Cruising is touching, resonant, and deeply felt... Espinoza’s book invites us to think about the right to freedom of sexual expression and where it fits in within the larger aims of the LGBTQ community."
—Michael Nava, LA Review of Books

""Espinoza makes us feel the power of carving out queer spaces in the wider city.""
—John Birdsall , Los Angeles Times

"Alex Espinoza’s 'Cruising: An Intimate History of a Radical Pastime' takes readers on an inspired, greatest-hits tour of public bathrooms, bathhouses and wooded areas in cities the world over to reveal the scintillating backstory of anonymous gay sex and its evolution, from Greek antiquity to the present."
—Alexis Burling, San Francisco Chronicle 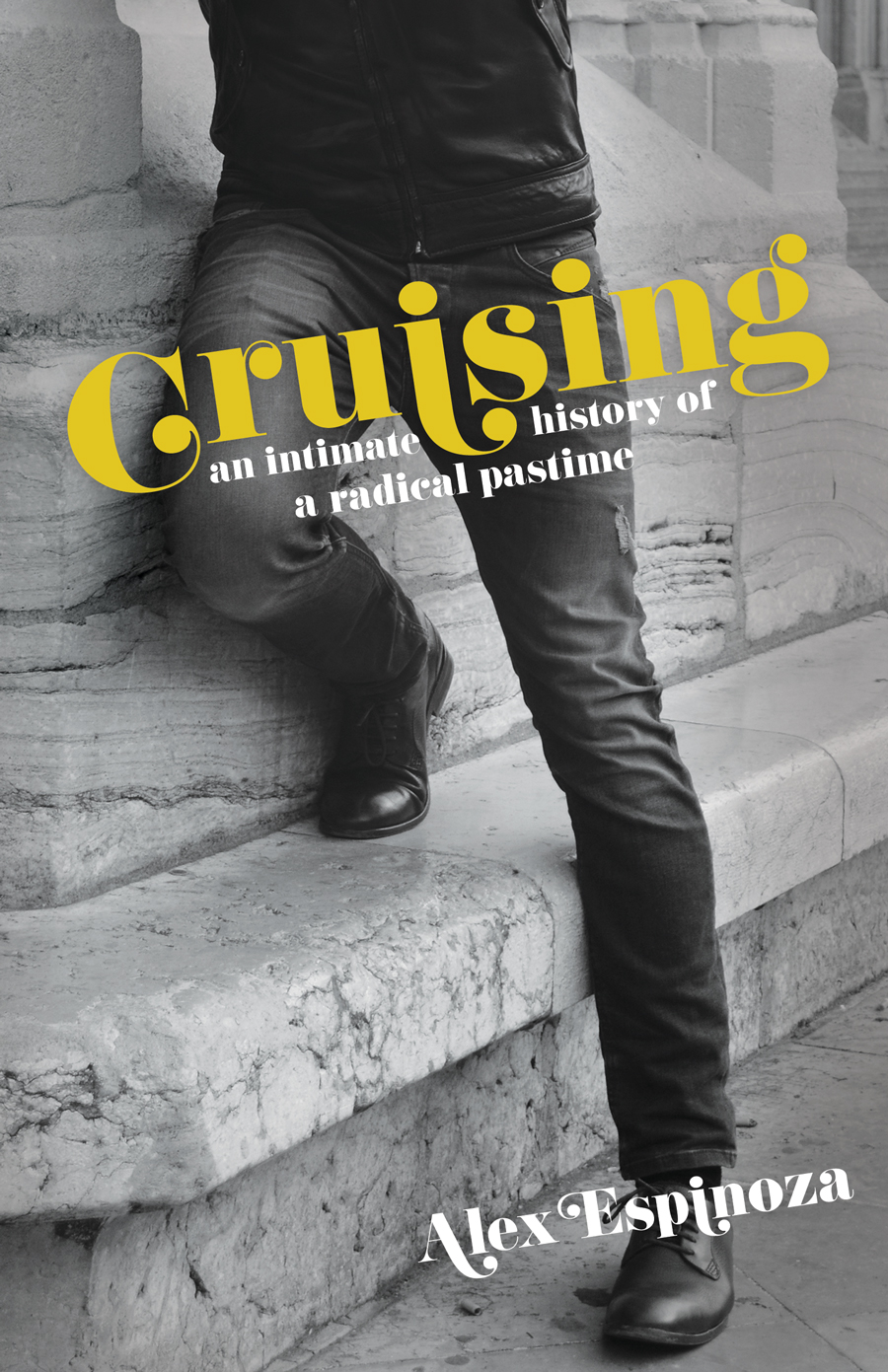 Alex Espinoza is the author of the novels The Five Acts of Diego León and Still Water Saints, a Barnes and Noble Discover Great New Writers Selection.  Read more...