“One of Library Journal's Key Spring Titles for 2015”

In a city constantly under siege the only way to survive may be, quite simply, the secret to eternal life.

Welcome to Baghdad in the immediate aftermath of the US invasion. A desperate American military with no discernible understanding of the complex cultural differences in Iraq has created a power vacuum that needs to be filled. Religious fanatics, mercenaries, occultists, and American soldiers are all vying for power. So how do regular folks just get by in one of the least hospitable places on the planet?

If you're Dagr and Kinza, a former economics professor and a streetwise hoodlum, you turn to dealing in the black market. But everything is about to change, because Dagr and Kinza have just inherited a very important prisoner: the former star torturer of Saddam’s recently collapsed Ba’athist regime, Captain Hamid, who promises them untold riches if they smuggle him out of Baghdad.

With the heat on and not much reason left to stay in Baghdad, they enlist the help of Private Hoffman, their partner in crime and a U.S. Marine, who undertakes to help them escape the authorities. In the chaos of a city without rule, getting out of Baghdad is no easy task and when they become embroiled in a mystery surrounding an ancient watch that doesn’t tell time, nothing will ever be the same. With a satiric eye firmly cast on the absurdity of human violence, Escape from Baghdad! features more than a few shades of Heller’s Catch-22 and David O'Russell’s Three Kings while doing something all-together shocking: the story gives voice, ribald humor, and some serious firepower to people most often referred to as “collateral damage.”


Praise for Escape from Baghdad!

"Saad Z. Hossain’s ESCAPE FROM BAGHDAD! may be the hippest, weirdest, most creative and visionary book yet to emerge from the full-on debacle that was W’s still-simmering Iraq war. Hossain's unique blend of satire, mythology and speculative fiction makes ESCAPE a hold-onto-your-hat tilt-a-whirl joy to read. And, quite possibly, a future classic in its own right."
—Jerry Stahl, Happy Mutant Baby Pills, I, Fatty, Permanent Midnight,

"A marvelous mix of genres, blending the visceral atmosphere of a war movie with the casual nihilism of CATCH-22 or the original M.A.S.H. complete with an Indiana Jones–style treasure quest to employ a mystical watch that doesn’t tell time to unleash the ancient power of the Druze before the sect’s ancient Alchemist, the real enemy, catches up with them...A gonzo adventure novel that shreds the conventional wisdom that pulp can be pigeonholed."
—Kirkus Reviews,

"ESCAPE FROM BAGHDAD! is a virtuoso performance, both utterly heartbreaking and riotously, laugh-out-loud funny... I wanted to stand up and applaud when it was finished, but I didn't want it to finish. I could not recommend it enough."
—Lavie Tidhar, World Fantasy Award winning author of OSAMA

"Saad Hossain has given us a hilarious and searing indictment of the project we euphemistically call 'nation-building.' With nods to CATCH-22, FRANKENSTEIN, THE ISLAND OF DOCTOR MOREAU and the Golem myth, ESCAPE FROM BAGHDAD! weaves fantasy, absurdity and adventure into a moving counter-narrative to the myth of the just war."
—Daniel José Older, NPR

"I loved this book an unreasonable amount… A madcap black comedy, this one is not to be missed. "
—Liberty Hardy, Bookriot

"Saad Hossain's perplexingly weird debut novel, ESCAPE FROM BAGHDAD!, captures the pure insanity of the Iraq War. At the same time, it's not a war novel. Instead, it's a skillfully constructed literary IED that brings together the sharpest aspects from multiple genres. It's a Tarantino-esque HEART OF DARKNESS set in war-torn Iraq, filled with absurdism and dark humor, a mash-up of satirical Joseph Heller-style comedy and sci-fi fantasy with a gratuitous mixture of good old-fashioned ultra-violence."
—Colby Buzzell, VICE

"Set in the aftermath of the US invasion of Iraq, Bangladeshi author Saad Hossain’s debut novel is a riot of mordant humour and gonzo storytelling… The Gulf war may just have found its CATCH-22."
—James Lovegrove, The Financial Times

"Saad Hossain is the author of ESCAPE FROM BAGHDAD!, an engrossing cross between Zero Dark Thirty and Raiders of the Lost Ark that takes a sobering look at America's troubled legacy in Iraq."
—Adam Morgan, Bookslut 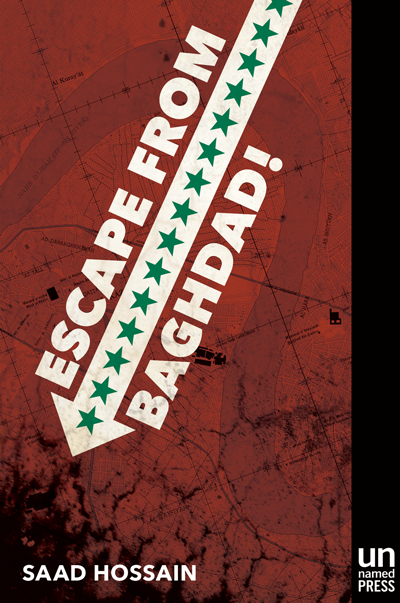 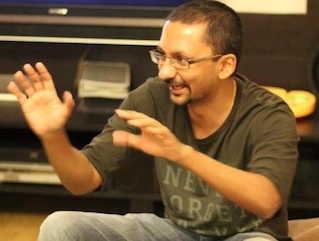